Students are the Stars

Theatre major Rory Schrobilgen is accustomed to performing alongside major talents, but sharing a stage with Ana Gasteyer and Stephanie D’Abruzzo for the night’s opening number was a whole new experience for him.

“Being a part of ‘A Starry Night’ was pretty unreal—words don’t quite do it justice,” says the then sophomore. “It was really cool getting to meet so many successful Northwestern alumni who seemed genuinely excited to be back performing at their alma mater. It made me feel proud to be a student here.”

Also a student in the music theatre certificate program, Schrobilgen learned a lot about what it takes to be a pro in his chosen business.

“The whole rehearsal process was a master class in poise and professionalism, on and off the stage.” he says. “It was a treat getting to observe so many esteemed members of the entertainment industry so in their element.”

Students weren’t consigned to waiting in the wings but instead were given high-stakes leadership roles. June graduates Keebler Straz and Madeleine Kelly were the event’s student cochairs, and Jake Daniels led Mee-Ow’s student sketch-writing team. Daniel Bittker, a recent graduate of the master of science program in leadership for creative enterprises, served as the assistant to executive producer Don Weiner (C79) and coexecutive producer Dave Harding (C78, GJ79). Bittker started in October 2017 by sitting in on conference calls; eventually he worked up to drafting scripts, coordinating the 200 student volunteers, and serving as day-of point person for all the behind-the-scenes forces at play. The experience sealed the career deal for him. 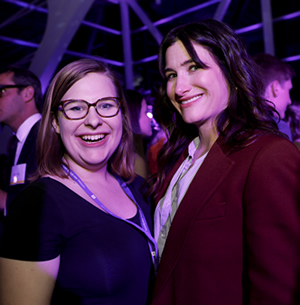 “Watching Don Weiner, one of the preeminent producers and directors in Hollywood, especially for multicamera directing, showed me that’s the pathway I’d like to follow postgraduation,” he says. “He wanted consistently to make sure students were involved in every aspect of production. He really took me under his wing, and by the end we were joking how I’ll take the next one in 38 years. The family reunion atmosphere and connections to Northwestern helped make this experience one to remember.”

Undergraduate performers were a highly visible mainstay of the evening, singing backup for alumni, acting in Mee-Ow sketches, and even stealing the show in their own right, as senior Lucy Godinez (C18) did with her rendition of “Breathe” from Lin-Manuel Miranda’s musical In the Heights.

The most overt display of student involvement came with the venue itself. Four MFA candidates in the theatrical design program were tasked with designing the show’s set, stage, and lights, a process that dovetailed with their studies in a new faculty-implemented collaborative approach.

“We wanted it to have a level of spectacle that really encapsulated the tremendous talent that has come out of this school over the years,” says Anthony Forchielli, who with Joseph Franjoine, Woongjin Oh, and Scott Penner designed the space. “There’s no program in the country that teaches you how to design something of this scale and lets you do it. I could work for 30 years and not come upon something like this. Northwestern gave me that opportunity.”

Even with their imprint on the event’s most high-profile elements, students were still starstruck. Rising senior Liza Alrutz volunteered to be a talent chaperone for the show and was assigned to actress Kathryn Hahn.

“She was one of the loveliest women I’ve ever met,” says Alrutz, “and I had so much fun hanging out with her that night.”

When Hahn introduced a show segment about influential Northwestern alumni, she also gave a shout-out to Alrutz from the stage—inspiring loud cheers from students in the back of Ryan Fieldhouse.

“I was crying in disbelief, and she just walked off stage giggling and asked, ‘Did you hear people cheer for you?’ I could barely even form words,” says Alrutz. “We both said we almost feel like we’ll meet again in life, but we’ll see. It was a really fun night.”